Did you ever go through a point in your teenage life where you were discovering your sexuality? Are you currently going through this phase and don’t know what to do? It’s difficult for anyone to go through this journey of discovery but it’s a path we all need to take in order to move on. It’s 20-Gayteen. Being gay, lesbian, bisexual, pansexual, asexual, transexual etcetera, shouldn’t affect the people around us. It’s a part of today’s norm and the film world is finally getting into terms with this.

Alex Strangelove follows a young, well-rounded high school senior named Alex Truelove (Daniel Doheny). He has everything going for him; a wonderful girlfriend, Claire (Madeline Weinstein), becoming school president and having an all-around great education. He has a bright future ahead of him until, of course, his emotions and feelings get to him for a young man by the name of Elliot (Antonio Marziale). Alex begins to go on a journey of discovery; is he truly in love with his girlfriend, Claire or does he have stronger feelings for Elliot? 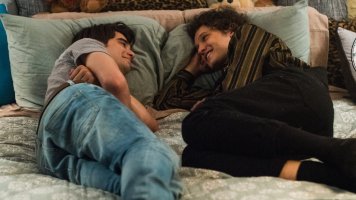 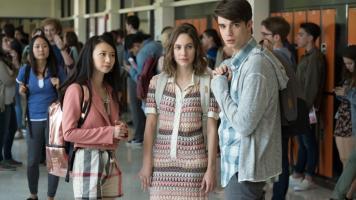 I truly was not expecting to enjoy this film as much as I did. I was expecting teenage stereotypes dumped into high school somewhere in America but it is nothing like that. It kind of gave off that impression at first but Craig Johnson soon turned that around. He solely focused on the relationship struggles the character was having, from start to finish. No focus on the setting, no focus on the stereotypes, just fully focused on well-written comedy and a story of discovery. Keeping it simple and it works so well. Most of the time, I was genuinely giggling to myself, laughing at the hidden puns and enjoying watching Alex Truelove’s journey. This shows how much time and effort Johnson has put into the writing of this script. Having constant hidden references to being gay was ingenious, it kept that humourous essence running throughout the whole movie. The humour was on-point. Changing the cereal to “Heter-o’s” and “Gay Flakes” was a personal favourite of mine and the odd-breaks into the fourth wall delves deeper into the characters feelings, accentuating the comedy further. Comedy is easily the hardest to write and I personally think Johnson was proud of himself when he came up with these ingenious but awfully-funny puns.

Blue is usually associated with sadness and depression, but that wasn’t the case here. When used within the film, the constant tone of blue throughout subliminally told the character’s feelings to the audience. Daniel Doheny’s performance couldn’t have been more straight if he tried, and that’s a good thing. He’s showing teenage audience’s that it’s okay to be gay. I imagine impressionable teenagers will look at this film as an acceptance, they will see Doheny as a mirrored image of themselves. Madeline Weinstein was great in supporting Doheny. She is acted with comedic poise and took on the role with class. Again, she acted what I could imagine any girlfriends reaction would be to having a gay boyfriend. Weinstein and Doheny made it relatable viewing for all the young teens.

We’ve had the likes of Blue is the Warmest Colour (2013) and Moonlight (2016) to spread awareness about the LGBTQ+ society. However, Alex Strangelove is within a different category. As much as they hit the chords within the BAFTA’s and the Oscar’s, Alex Strangelove will never be within that entity. It’s not a film to take seriously and watch intensely with eager eyes. It’s easy viewing, a gay-flick to stick on and enjoy with a bunch of mates, snuggled up into the sofa with a stupid amount of unhealthy snacks. In fact, I would give this another watch myself. Does anyone want to set-up an unhealthy-eating, gay-flick screening with me? I’m down if you are.